STEP TO ORDER CUSTOM DESIGN :1, Buy custom design products2, Send your ideas to our email for advice (support@lightboxgoodman.com)3, Wait 1-3 days for the demo4, Get demo and edit (3 times free)5, Make a deal and receive files.

How to get buy one get one (Only Digital) I wanted a custom lightbox that represents the state that I live in. I sent several different pictures of items that I wanted to include and within a day I had a mock-up of the design which was exactly what I wanted. In fact, it was even better than I had imagined!

I requested a custom lightbox for a friend. It took just a few days, and I was sent a mock up of the image first. They combined two images for me (one was just a text-based logo). I let them know the specifications of the small diecut machine I had, so they made sure the dimensions would work for it.

Only complaint, and not a big enough one for me to remove any stars -- there was a tiny detail in the image that wouldn't have cut out, and it took me a little bit to figure out how to fix it, which I did eventually by removing it all together via Illustrator. I realized afterward that I could've just removed it in Cricut Design Space and it would've been significantly easier.

Very happy with the design and the turnout!

Awesome creation combining the two loves of horses and guitars together in one! 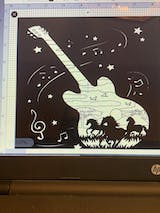